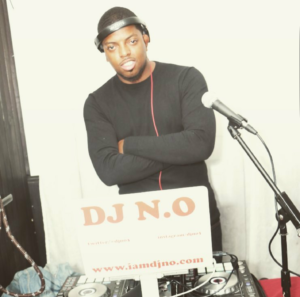 DJ N.O is from Brooklyn NY, he has a west indian background his mom being from Guyana. DJ N.O started DJing when he was a tender age of 16 years old. While everyone else in his neighborhood was playing sports or doing wrong he was perfecting his craft. It wasn’t until he was in college that he decided to take the music business more serious.
DJ N.O has spun all over the tri-state area as well as all over the world. He was spinning in the clubs before he was legally able to get in.DJ N.O has been on numerous of radio shows from primetyme radio to alist radio to brooklyn college radio to john jay college radio and now his home is www.dtfradio.com every monday from 8-10pm. DJ N.O has been featured in online magazines. He comes out with mix tapes every month to showcase some new talent from all over. He’s in the clubs every day of the week mixing hip hop with top 40 with reggae and soca etc.
DJ N.O has done shows with your favorite artist from Grafh, J-Hood, Tone Trump, Fred da Godson, Cory Gunz, and Maino just to name a few. Meet him at any club to find out why the nick named him “THE PARTY STARTER”